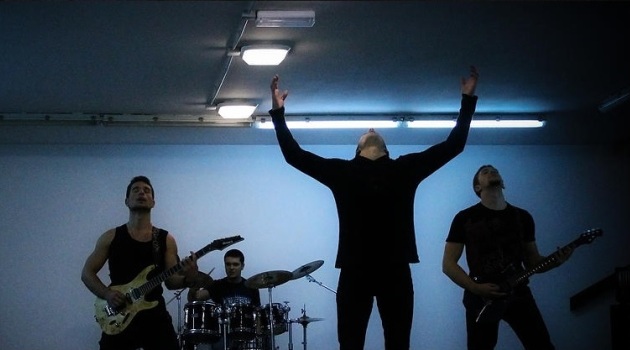 The band started working on their first original track "I Believe", recording heavy as hell riffs and grooves perfecting the sound that you know as "Dot The Eye" today. The band then looking for a recording studio that would fit their needs, had been checking various studios all around Belgrade, when finally Miloš showed up with an unmixed recording of an unknown band that was made in his good friend’s studio. It had a killer professional sound and after checking it out they decided that this was the place that they wanted to record their full length album. After few major gigs the band decided to bring on one more guitar player, and George was the perfect fit. A seasoned guitar player schooled in London George decided that "Dot The Eye" was exactly where he wanted to be and finally the bands lineup was 100% complete. Dot the Eye has played in various clubs, venues, competitions and much more. They have played in Serbia, Bosnia ,Hungary Croatia and Macedonia. Entering in competitions for the "Exit Festival", "Belgrade Beer Festival" and they were also finalists in the Region for the "Wacken Open Air Festival". They have played at multiple guitar festivals around Serbia and the Balkans. The album "self titled" has made a big impression within their local fan base and have also made a big impression in various regions throughout the US, United Kingdom and Europe. Mirá el video de “When You Die”: Para más información de Dot The Eye visitá su Fan Page.

En Surf & Rock te presentamos nuevas bandas surgidas de cualquier rincón del mundo y, esta vez, llega desde Örebro, Suecia. Cómo ya se han dado cuenta, nos encanta presentarles nuevas bandas, y no importa de que lugar del mundo sean oriundas. Esta vez, en Surf & Rock, la recomendación llega desde Örebro, Suecia. Allí, en 2018, se formó Surfing The Orbit, conformada por Robin Lundahl, Wictor Helgesson y Henrik Westberg, decididos a ofrecer música hecha para ser escuchada en vivo y para ser tocada frente a una gran multitud debido al gran arreglo del coro en las canciones. Cómo es habitual, te dejamos su presentación en inglés, tal cual ellos se describen: If you’ve ever been to a Surfing The Orbit concert you know that you won’t walk away without singing the tunes to one of theirs songs. With their catchy melodies, atmospheric soundscape and well-arranged vocals and harmonies, Surfing The Orbit is here to spread good vibes like a true surfer. It all started in Örebro, Sweden, where Surfing The Orbit was created 2018 and released their first single Up In The Air. They have so far released four singles with one of the singles picked by Spotify Editors and was added to the Spotify playlist ”New Punk Tracks” with 120k followers. 2020 they are going to release two singles, two EPs and one album. The genres of the music are arean/pop/punk/space with a touch of surfrock in its own flavour. This music is made to be heard live and to be played in front of a big crowd due to the big choir arrangement in the songs. With its own and unique sound Surfing The Orbit is ready to give the audience the best rock show of their entire life. Escuchá “California Sun” de Surfing The Orbit: Para más información de Surfing The Orbit visitá su Fan Page Oficial.